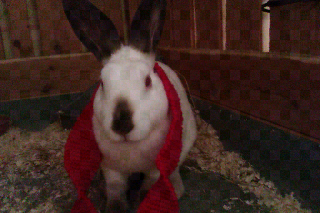 Such a handsome bun!

Betsy coughed to clear her throat and thumped her rear foot lightly. "C'mon Gus! I have to make the five o'clock news here!"

Gus bunny grumbled under his breath as he hauled in the camera. Oh no, he couldn't stea - er, borrow, his Dad's NEWEST camera, because that would be noticed, he had to go get the older, heavier, bigger one. Betsy was so PICKY. He stopped and put down the strap as their victim, er, interviewee watched with nose wriggling a mile a minute.

"HI There!" Betsy said, bounding up. "I'm Betsy Bunny, this is my boy puppet, Gus." She turned to look over her shoulder to Gus, "And be sure to get my good side! I spent all morning grooming and napping to look my best for this!"

"One side is much like the other," Gus grumbled.

"WHAT?" Betsy growled, pretending not to have heard him perfectly.

"You're equally beautiful on both sides?" Gus reiterated, hopefully.

"That's better, mister." She grumped before turning back to Speedy and turning the sunshine and light on. "So, Speedy, you're the bun with the scarf!" she said

Speedy nodded, cautiously. He wasn't quite sure how he'd gotten talked into this whole 'interview' thing, but it seemed to involve a lot of bossing around. But, then, near as he could tell, having a mate meant having someone to boss around .. for the female. He didn't think he wanted someone to nag at him, he liked having a Mum, he didn't need a wife thankyouverymuch.

"You got that thing running yet?" Betsy snapped at Gus.

"I think so." Gus said, ear cocked to the slight sounds of the electronics working.

Aware that she was now 'on the air', Betsy gave him her sweetest eyelash flutter, "Thank you, Gus, I'd just be LOST without you." She sat down kitty corner to Speedy so the camera could get both of them. "Now, tell me Speedy, how did you come about to gain a scarf."

"Well, I saw one online, and I decided I wanted one." He replied simply.

"Uhm hmm," Betsy agreed, thinking does were SO much easier to interview, "﻿And how did you get one after deciding you wanted one then?"

"Oh. I got my Mum to knit it. She grumbled that she isn't very good - but just look at it!" He turned about so they could admire the bright red scarf, "Isn't it marvelous?"

"Yes, humans do have their uses!" Betsy agreed. "And its a very nice shade." She nodded. "Does it keep you warm outside?" She wasn't supposed to know about the outside place, her human thought she and Gus were napping in the back of their tunnels. Humans, as all bunnies knew, weren't very bright.

Speedy turned to look over at the window, "Its been nasty out there, all rain and hail, I haven't had a chance to go outside yet.. so mostly I've just been hanging it on the wall and nibbling on the fringed bits. Mum doesn't like when I do that, but I think she's just being lazy about not wanting to have to make another."

"Humans ARE so difficult sometimes, aren't they?" Betsy commiserated. "Do you think you'll get another scarf? Maybe in blue?"

"Oh!" Speedy thought about that, seemingly liking the idea but then shook his head, "No, I think one scarf is enough for now. I'm not sure where I'd keep a second one."

Betsy nodded in what she called her 'sage and understanding' manner. "Storage IS always such an issue!" she agreed. "Well, congratulations Speedy on your scarf. Training humans is such hard work! Hopefully other humans will pick up on this bit of training and save some future buns some future work!"

They all wriggled noses and bottoms at the unlikeliness of THAT!

"This is Betsy Bunny, Gus Bunny, and Speedy Bunny, signing off from Great Britain!"

Gus pushed the stop button and looked over at Speedy. "What makes it great?" he asked with idle curiosity.

"All the bunnies!" Speedy replied with great conviction.

"Duh." Betsy said to her mate with condescension.

Gus just rolled his eyes and started to haul the camera back to the closet portal. They better be back home in time for dinner, or Betsy was getting her tail nipped!

Betsy gave Speedy a lick on the nose, "Thanks handsome!" she said before turning hock and hopping after Gus. "..I'll open the portal this time, you always try to take a left in Albuquerque!"

Speedy blinked slowly and then started to groom his nose. That lick had felt quite funny. He sneezed. Ugh. Girls.

He shook all over and picked up his scarf to pull over to his warm spot by the radiator. He nosed it about a few times until it was in a nice looped pile and meatloafed on top, inner eyelids starting to drift closed. He looked quite dapper AND it was a comfy pillow. He did really have quite the talented Mum.

Betsy and Gus come from The Life and Time of Bunnies :)
Speedy can be found at Speedy the Cheeky Bunny
Posted by Shadowydreamer at 2:29 PM