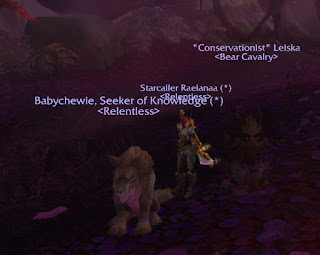 We're gonna pretend that Leiska is Leensa, an elven paladin not a cat.

Babychewie was a sad Tauren. Everything was coming apart; it was almost worse than when Garrosh was in command. Sylvanus had locked up his chief, and she'd murdered a powerful ally in cold blood, who knows what she was doing to the powerful Orcs behind the scenes and Saurfang was gone.

All the voices of reason stolen away or murdered, and for what? To burn down women and children? To slaughter artisans and innocents? It was enough to make him wonder if he was watching the end of the Horde.

The large shaman sighed over his drink. He couldn't even get whisky in Zandalar. Oh, sure, the Goblins would import it, but it often sold out before he could even get his hands on it and at Goblin like prices. The rum just wasn't enough. It was never enough. The humidity made his fur sticky. The endless heat made him cranky.

The Alliance had murdered a king, and what did the Horde do? Murder it's own.

A large mug got plunked down in front of him; it's contents the shades of amber he was always happy to see. And while he didn't generally like watering down his drinks with ice, in this heat, he was happy to see the cubes inside.

"Someone looks bummed, sister," Raelana said, patting Chewie on the arm. She flomped onto the stool beside him. Rae's armour, usually more absent than present, was gone and she wore a blouse knotted under her breasts and netted leggings.

"It's not unjustified, sister," Leensa said, plomping herself down onto the other stool. Her usual battered armour replaced with a cropped blouse and long shorts.

"Mmmrgh." Chewie managed, taking a swig of the whisky.

"Smuggled it out of Ironforge ourselves!" Rae said happily.

Leensa grinned. "And by smuggled, she means we broke in, smashed heads, raided the tavern, took a few kegs and came looking for you."

"Kegs," Rae confirmed wriggling her long eyebrows. "They're sitting under an ice elemental. He's not happy about it, but that's his mage's problem."

"So, what're you up to besides moping?" Leensa asked the shaman.

Chewie sighed. "The Horde is dying."

"Is not," Raelanna told me.

"Is not three," Leensa added.

Chewie blinked and looked at the paladin who just shrugged at him. It'd seemed amusing to her at the time.

"With paladin subtly, of course," Leensa added with an innocent smile.

"I mean, she was a great Banshee Queen, she had someone to rein her in when she got too big for her britches, but as Warchief.. nuh uh. Gotta go."

"So let's figure out a way to keep her AND get a good warchief going. She's got the heart of the Horde in mind, too bad she has no soul."

"NO!" Chewie and Rae yelled in the same voice.

"No," Chewie repeated. "With all the weird stuff with old gods and souls going awol and the loa and .. no. Even if his spirit hadn't moved on, even if the legion hadn't corrupted his body when it killed him, just no. It would be far too dangerous and an all-around bad idea."

"At least Syvie didn't make him Forsaken." All three shuddered.

Rae downed her shot on whisky, a shot that was one third the size of Chewie's. "Let's go kick some ass."

Leensa downed her own. "Right!" she paused. "Where are we starting?"

"With the Goblins," Chewie said, downing his own whisky with satisfaction. "Easily bribed, get everywhere, and if we give them stuff to blow up, they'll be even happier."

"See! This is why we like you, Chewie, you come up with ideas that involve explosions!" Rae jumped up off the stool, wobbled a bit, and steadied.

"No.. I didn't.." He sighed. He felt like a babysitter with these two. He was trying to herd babies with big swords and no sense.

"Ohh, and head butting! Let's get our armour. Grab your hammer, Chewie! We'll meet you on the docks!" Leensa got off her stool more carefully than her sister. She didn't quite have Rae's alcohol tolerance.

Chewie looked at his empty mug and wondered if he should finish the rum too. He might need it before another adventure with the Blood Elf sisters.

Posted by Shadowydreamer at 3:46 PM