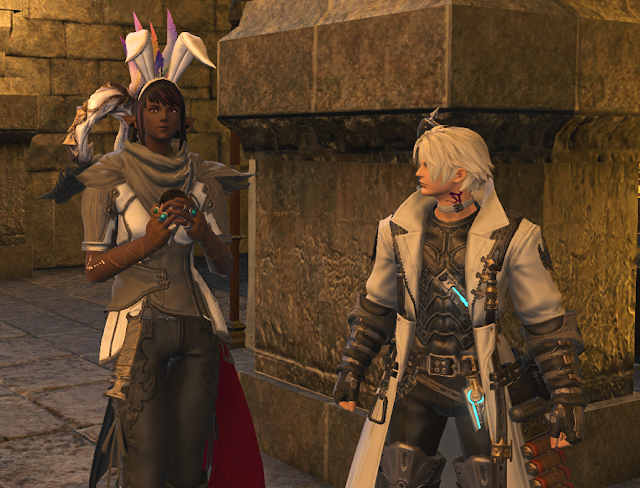 It was a sunny Mor Dhona, bright and crisp after a pounding rainfall the night before. Puddles were drying on the flagstones on the cafe's patio where the Warrior of Light and Darkness, one of Eorzea's many heroes, sat and drank tea. Her fellow Scion, Thancred Waters was duelling the air with his gunblade and trying to ignore her.

"Oh mighty Thancred, show me how to use your gunblade," Rhasody said, batting her eyelashes at him in a falsetto voice. Several young women were watching from a distance with hearts in their eyes. "You're so graceful and dangerous!"

"You're worse than Y'shtola," grumbled Thancred, failing to ignore her. "Don't you have better things to do?" He followed through on a slash, combining his earlier training on this world with that of the First.

"No, this is it," Rhasody replied cheerfully, taking a sip of her tea. It wasn't as good as Tataru could make, but she supposed she couldn't ask the backbone of the Scions to make every cup.

"I liked you more when we were strangers, and you were shy," grumbled Thancred. It was well known the hero had few words to say to people she wasn't sure of. She was slowly coming out of her shell, but it had been a long, upwards, trek.

"Urianger, help me out here!" Thancred called to where the caster was frowning over a book.

"Y'shtola, and I have been discussing how thee might be able to talk to the soul within," Urianger said, seemingly not paying attention to Thancred.

Rhasody tilted her head to one side and looked at him with interest.

"Oh yes, discussing long and hard into the night, I'm sure," Thancred interjected with a smirk. "Oh, Y'shota, thy aether senses are so strong.." he broke off when Rhasody flicked some of her tea at him. "Hey! Not the coat!" He panic-checked that none of the rose coloured water had hit the brilliant white leather. "You'd think the great Warrior of Light would have better aim."

Rhasody smiled sweetly at him.

Thancred growled at her.

"With thy familiarity with crystals and with Allagon memory devices.." Urianger continued as if he had never been interrupted. "..it should be quite possible for thee to connect within to that which resides." He sat staring into nothing for several moments, tapping his cheek in a very Y'shtola like manner.

Rhasody shot a look at Thancred, who was opening his mouth. Her fingers were hovering over her tea in warning. Thancred sighed and propped his gunblade on his shoulder.

"You know, you haven't practiced in a while.." Thancred said with a smile.

Rhasody's eyes narrowed as she looked at him suspiciously.

"There might be a day where the aether is too thin for casting, where you've been silenced by a mighty foe, and then what will you do? Do you even know how to hit the enemy with your flower stick?"

Rhasody looked at her staff and then shot a glare back at Thancred.

"Oh, sorry, did I insult the mighty bloom of thwacking?" Thancred asked, grin getting larger. "Did the unicorn that blessed it just neigh in righteous fury?"

"'Tis a fair point," Urianger said. "Although, perhaps the best strategy would be to stand behind Thancred and let he do all the work."

Rhasody shrugged a shoulder and raised an eyebrow at Thancred.

"No, not going to cut it. I think you need some exercise."

"Hmm." Urianger offered, picking up the reticule he carried with him everywhere. He rifled through it while Rhasody tried to come up with a good reason not to spar with the gunbreaker who was starting to grin maniacally.  The Elezen pulled out a crystal of make very familiar to all the Scions. The runes inscribed on it were different from those they'd used on the First, and it had no red tip but otherwise looked much the same. He held it up to Rhasody. "Perhaps this will assist thy dreams this eve."

Rhasody took it with some reverence. "Thank you." She wanted to ask Ardbert what he wanted to do, hanging around in her soul, even the shard that remained of him, couldn't be ideal.

"Yup, that's this eve. Until then, pick up your plucked broom and let's have at it." Thancred said, tapping his gunblade against his shoulder.

Rhasody sighed and downed the remainder of her tea in one gulp before standing. She should have chucked the mug at him; then, he'd be too busy panicking about laundry to bother with her.

Posted by Shadowydreamer at 4:15 PM