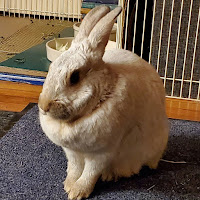 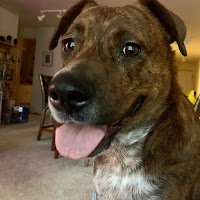 Teddy came out of the closet to find carpet under his paws. He was pretty sure that his Aunty Michelle didn't have carpet in her house. A lack of carpetless floors meant he'd probably taken a wrong turn in the bunny tunnels again. Was it his fault that the maps Speedy had him print out were so tasty? Was it his fault that he could only pull his tablet out of BunSpace in his condo?

Speedy had tried to get him to summon a ghost bunny to help navigate, but Miss Lola had said that he had to learn even if it was the hard way, and Mr. Mick had said he was taking a nap. Teddy wasn't sure why a ghost bunny would need a nap, but Mr. Mick had been very insistent about it.

A large, brown form loomed over him. "Hello!" said the creature.

The creature had a slobbery tongue, a jingly collar and was bouncing up and down in spot in a way that spoke of way too much energy. "Er, hello." Teddy offered cautiously.

"I am Rory, why are you in my house?" The creature asked.

"I'm Teddy, and I am lost," Teddy answered honestly.

"Yes. He is human. He is a good cuddler, but he spends too much time staring at a box." Rory looked over his shoulder to a door before turning back. "Would you like to play tug?"

Teddy looked at their comparative sizes. Rory looked like he weighed at least thirty-three kilograms. "I think you'd win."

"I play fair! My Dad thinks he's better at it than he is." Rory trotted off and came back with a toy rope that was a little ragged. He dangled an end for Teddy.

Still rather dubious, Teddy took his side and got dragged as Rory backed up.

"Okee, hold on!" It was probably a good thing animal communication was mostly mental, otherwise a mouthful of rope would have stifled the instruction. As it was, the ruffs and mock growls were distorted.

Teddy dug claws into the carpet as Rory backed up and started to tug. The dog wasn't pulling very hard until he felt the rabbit had good traction. The harder he pulled, the more Teddy had to bite down, and unfortunately, rabbit teeth were very good at snipping things in half, even hefty dog toys.

When the rope broke, Rory went ass over tea kettle into the fireplace with a loud crash and clatter.

Teddy, startled, dived under the couch.

Rory's human appeared. "What are you doing?!"

The dog got himself up with a shake and wagged his stump happily, looking at innocent as he possibly could.

The human looked at the puffs of white fur that were slowly falling to the floor.

Rory tried to look affronted at such an accusation. Him? Eat a pillow? Never! The ones they currently had weren't very tasty.

His human shook his head and went back into his room.

Teddy stuck his nose out from under the couch, "Are you okay?"

"I'm fine! That didn't hurt. Maybe tug isn't a good game." Rory said sadly. "Fetch is fun, but it's a human game. The way they throw things away to have them brought back is strange."

"Humans are strange." Teddy agreed. "But.." He looked towards the closet, "I'm supposed to be visiting my Aunty Michelle, I should probably try and find her."

"I'll try!" How hard could it be to get lost again? Teddy was getting very good at it.

The closet door had swung shut, so Rory had to try and turn the knob with his mouth while Teddy tried to get his nose in the crack to pull it open. It wasn't a quiet effort.

"What ARE you doing? The human asked, causing Rory to scramble backwards. Fortunately, this opened the door and allowed Teddy to get inside before the human got a good look. He wasn't very good at hiding from humans yet either.

Rory gave his best innocent look, sitting and holding up a paw while his stump of a tail thumped against the carpet.

"Was that a rabbit?" The human asked himself. "I've got to stop talking to Lorna so much. I need coffee." He looked at the new cloud of floating white fur that was settling on the carpet. "A lot of coffee."

Posted by Shadowydreamer at 10:10 PM