[FanFiction] [Pirates of the Caribbean] Running with Rum 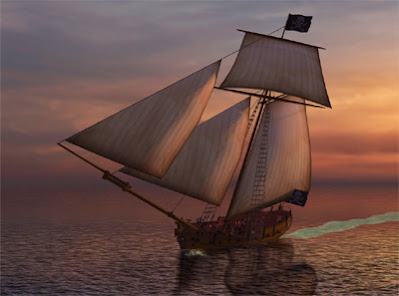 Chapter One : Sleeping on the Job

Chapter Two : Why is the Rum Gone?

Chapter Four : On Board The Pearl

Chapter Nine : Beach Blankets and Rum It had been another sunny day in the Caribbean. The crew of the Rum Rabbit were sprawled out on the beach, shaded by palms, enjoying the breeze and wind. All bills were paid, cargo delivered, and still there was rum leftover. In fact, there'd been enough rum leftover that Cap'n Ren had sold a chunk of it to pay off the Pearl's tavern and docking fees before leaving the rest in trust. She had a sneaking suspicion that when Speedy had returned from the Dutch East India Company vessel, he and a few of his fellow four feet had gone across and stolen all the rum from that ship as well. Rabbits may be high maintenance, but when you put them to work with their strengths, they sure did pay out. Cindy was lying on her back on one of Jack's bandanas. "Comfortable?" Ren asked wryly. Rabbit paws weren't flexible enough to make the actual rude gestures that humans favoured, but they a one eared salute got the message across.

The human half of the crew were busy trying to see if they could out-swim the tide. Ren was exhausted just watching them. Besides, any time she went into the water, Diesel tried to get her on his back so he could dunk her. She wasn't falling for that a fifteenth time. The sun was starting to set, and it was probably more than time to relieve the crew they'd left on the Rum Rabbit. "C'mon, you louts, time to get back to the ship!" With grumbles and mutters, the crew picked up the empty bottles and a mostly empty half-keg of rum and staggered their way back towards the port. The rabbits seemed quite happy to nap on the beach with Diesal keeping guard. Ren just hoped the horse didn't fall over on top of them. The Captain of the Rum Rabbit looked out to see. "You'll always remember this as the day you almost captured Captain Ren's rum!" she told the waves.

Posted by Shadowydreamer at 11:26 AM